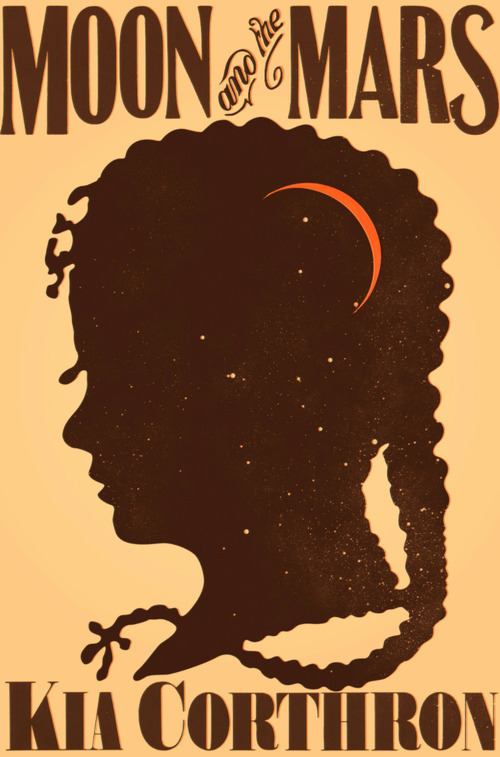 Moon and the Mars

Set in the impoverished Five Points district of New York City during the years 1857-1863, the reader experiences neighborhood life through the eyes of Theodora Brigid Brook, an orphan living between the homes of her Black and Irish grandmothers. Throughout her formative years, Theo witnesses everything from the creation of tap dance to P.T. Barnum's sensationalist museum to the draft riots that tear NYC asunder, amidst the daily maelstrom of Five Points work, hardship, and camaraderie. Meanwhile, white America's attitudes towards people of color and slavery are shifting—painfully, transformationally—as the nation divides and marches to war.

Kia Corthron has a knack for seeing what we cannot, for laying bare the truths we refuse to see. Moon and the Mars, her latest masterpiece, is an absorbing story of family and community, of Africans and Irish, of settler and native, of slavery and abolition, of a city and a nation wracked by Civil War and racist violence, of love won and lost. Unsettling the victim-perpetrator binary, she writes instead of people caught in the whirlwind of history, violence, politics, ideology, love, and desire; people navigating the actual world where race lines are drawn in shifting sands in blood and glue, elusive yet enduring, smelling of death and flowers. Corthron once again reminds us that nothing is black and white.

The Life and Times of an American Original

A searing, far-flung epic, a truly American tale, centered on one girl of African-American and Irish heritage, as she makes her way into a world rife with brutality, change and war. Kia Corthron is one of our finest novelists, constantly unveiling the truth and the way histories have been hidden from us, revealing people in all their glory and imperfection. This isn't just a novel. It is a history, a monument to hope.

—Rene Denfeld, author of The Enchanted and The Child Finder

Theo is the lone narrator in "Moon and the Mars," but her voice is so rich with the locutions and grammatical tics of her joint heritage that it sounds almost choral.... Ms. Corthron is less attracted by the spectacle of violence (familiar from Martin Scorsese's "Gangs of New York," for instance) than by understanding the tragedy's causes and aftereffects.... Ms. Corthron's humility and curiosity match her outsize intellect and ambition. Her big, immersive novel almost never sermonizes; it is, however, eager to teach.

Moon and the Mars is an immersive read, propelling the reader into New York's Five Points district between the years 1857-1863, as the nation marches towards Civil War.... Corthron, a critically acclaimed playwright, effectively draws from this experience bolstering the story with song, props—letters, news bulletins—and spirited dialogue, to make the novel intimate and immediate.

Playwright and novelist Corthron (The Castle Cross the Magnet Carter) combines a propulsive coming-of-age story with a fascinating history of the years before and after the Civil War… Corthron smoothly weaves in historical developments as divisions flare in the Five Points, such as the implications of the Dred Scott case, something Grammy Brook sums up concisely: "Whenever the rich make a crisis, you know what gonna fall to the poor is catastrophe." Corthron's ambition pays off with dividends.

Kia Corthron's debut doorstopper The Castle Cross the Magnet Carter won the Center for Fiction's First Novel Prize back in 2016 and we've been awaiting her follow-up with much anticipation. Set in the Five Points neighborhood of New York City, which will be familiar to any Gangs of New York fans, Corthron's new historical epic spins an absorbing and linguistically nimble tale that proves she's one of our most dynamic and risk-taking writers.

In the native language of the colonized Irish Gael, the proverb Ar scáth a chéile a mahireann na daoine tells us it's in the shelter of each other that the people survive. In Moon and the Mars, Kia Corthron has channeled the Seanchaí and the Griot, using beautifully rendered, gripping storytelling to resurrect histories too often disappeared. You will fall in love with Theo, a Black and Irish child who embodies her histories, as she takes you by the hand, guiding you through a mid-19th Century Manhattan landscape of community, solidarity, class manipulations, and racist violence. And you'll tear through these streets and pages of joy and heartbreak full tilt, emerging with a renewed call to solidarity—for all our survival.

—Michael Patrick MacDonald, author of All Souls: A Family Story from Southie

and Easter Rising: A Memoir of Roots and Rebellion

Kia Corthron, writing with insight, empathy and an acute sense of history, has reached into the divided heart of nineteenth century New York and produced a story of exceptional power. Through the eyes of Theodora Brigid Brook, a young woman of Irish and African ancestry, we encounter a city of vibrant streets, tangled loyalties, and the best and worst possibilities.

coauthor of All the Nations Under Heaven:

Immigrants, Migrants, and the Making of New York

Rarely does one encounter a book that can so profoundly change a reader. Moon and the Mars is that book. Corthron, a true heir to James Baldwin, presents a startlingly original exposure of the complex roots of American racism and classism as well as a sweeping exploration of love in all its myriad forms. The best work of fiction I have read in many years.

and author of One Flea Spare

In her absorbing and original second novel, Kia Corthron examines racism, family and identity through the eyes of Theo, a young biracial orphan growing up in mid-19th century New York City. You won't soon forget this one.

Corthron is a master of race, class and empathy and this book is sure to enter our canon as a touchstone of both the Civil War era and our current moment.

A wonderfully immersive read that transplants you back to mid-1800s New York City.